Between the excitement of the Boston Marathon this week and just talking to people at work about having recently moved to Cape Cod from New York I’ve been thinking a lot about all of the friends I’ve made through running.

I’ll be honest, Jason and I lived in New York for almost 5 years – I even grew up in New York right where we lived! – and we really didn’t have any friends there.  We were both so busy with our jobs that we really didn’t do anything outside of work and let me tell you, that can be VERY draining.

When I began running I didn’t have any friends that ran or any local running groups around.  I did all my training runs alone and I didn’t know anyone else doing the race I was training for.  I didn’t consider running a particularly social sport.

That all changed when I got to my first race, the 2011 Wine & Dine Half Marathon…

Through a series of unfortunate, yet serendipitous events (including but not limited to lightning striking the tracks of the train I was on to get to the airport leading to a missed flight), I met Jenn on the Magical Express at 1am.  Jenn is officially my first running friend.

Through Jenn I met the rest of my “original running friends” that weekend, Daniel and Patrick.

Me, Daniel, Jenn and Pat

Since then, and despite the fact that no more than 2 of us have ever lived in the same state at the same time, we’ve trained together, raced together and all crammed into 1 hotel room for trips together more times than I can count.

I’ve met countless other friends through running blogs and races and even ended up running the Marine Corps Marathon with Christine who believe it or not I had only met in person once before for about 10 minutes before we decided to tackle 26.2 miles together!

(**Christine and I are already planning and excited for our triumphant 2015 Marine Corps Marathon return!)

Even going to Boston this weekend I had so many friends I wanted to see in my short time there!

People that are NOT me L to R: Dani, Christine, Pam, Pat and Dave

And when Jason and I moved to Cape Cod we went to our local Marathon Sports run club one night and immediately had this instant group of friends who we not only see regularly at run club, but we get together to do all sorts of other things (like eat Mexican and this Run Club Movie Night)! 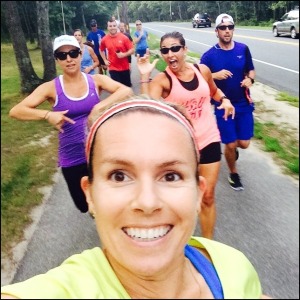 I’ve heard from so many others runners that they’ve experienced the same thing, that their “running friends” have become some of their best friends.

The answer came to me a few weeks ago on treadmill.

Well ok, to be fair, the answer came from my friend Dave on the treadmill next to me.

And he’s right.  We get together and we run and we talk about life and I get to know these people who I haven’t known for very long so well so quickly!

And when we talk about running, we immediately understand each other and we’re in it together.

Totally new to running? I hear ya, it’s tough!  Keep it up, it’ll get easier!

Chasing that elusive sub-2 half? Ugh, I remember that – why is it so hard to get a 1 at the front of that number?!

Training for your first marathon? Have you tried ice baths for recovery? When’s your next long run? You want some company?

And because we run together I know about your family, your job, why you started running and when your next race is.  We basically crammed 5 years of friendship into a 10 mile run!

(**I should probably also mention Kellie who I had a great chat with during our 20 mile runs…on the phone!  Yup, we talked for about 2 hours on the phone while doing our last long runs before this year’s Goofy Challenge!)

Many people think of running as a solo sport.  You and the road.

But for me running is about the community.  The support.  The friendships.

(Secretly, if I could keep all that stuff and forget the running part I would be very tempted…)

Thank you to ALL of my running friends (that includes YOU!), I don’t know what I would do without you guys!

Have you met new friends through running?

Share a story about how you met your running friends!