I feel like I always struggle to write full marathon recaps.  How do you write down the mental, emotional and physical experience of a 26.2 mile journey by foot?!?

I personally really enjoy going back and re-reading my race recaps, I look at my blog as a sort of journal (albeit a journal open for the world to read!), so that being said, apologies in advance for the very long recap, but I didn’t want to leave anything out.  I want to go back and read this as I’m getting ready for my next marathon and be able to re-live the Marine Corps Marathon just as I remember it today.

Good thing I lay all my clothes out the night before a race, because at 4:45am after a restless night of sleep there is no way I would be able to successfully dress myself and remember everything! 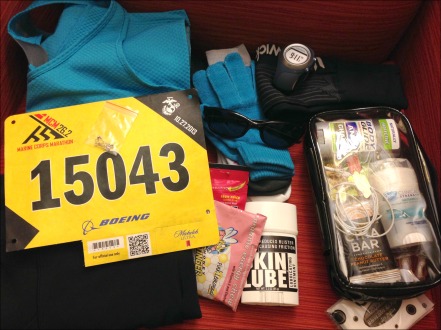 I hopped on the metro (which was only a couple of blocks from my hotel) and ate my bagel with peanut butter and drank a Powerade on my way.

At the Pentagon stop I followed all of the other runners for the walk over to the Runners Village starting area where I met up with Christine and Lisa who were both running their first marathon!

Christine, me and Lisa.
(photo from Christine)

We found a grassy area to hangout for a bit and then made a quick porta-potty stop before dropping off our bags at the UPS bag check (literally in the back of UPS trucks!)…

…and making our way to the starting area.  There were no formal corrals, only signs with estimated finish times and runners were expected to line up accordingly.  From where we were (back by the 4:30-5:00 hour sign) we could’t even see the starting line!

The National Anthem was sung by the Liberty Voices (alumni of the Epcot Voices of Liberty!) and everyone’s attention turned skyward as the American flag was parachuted in.  It was such a beautiful way to start the race!

The starting howitzer was blasted and we were off!

Well, not quite.  According to my gun time vs. chip time it actually took us 17 minutes to cross the starting line!  (Which left me enough time to hop the barricade and use the bathroom again quickly!)

Christine and I had talked back and forth the weeks leading up to the race and realized that we were both training around the same pace so we decided to start the race together and we’d see how it went.  We agreed that we didn’t want to hold the other person back, so if one of us felt stronger at any point we were free to go.

The start of the race was quite crowded and of course we immediately came to a nice big hill.  Christine and I steadily climbed it and by the time we got to the top we were both ready to shed our throw away layer of clothes – it had definitely warmed up quick!

Flag outside of a firehouse on that first hill!

For those first few miles Christine and I chatted and weaved our way around the crowds.  We fell into a comfortable rhythm and it was just like running with an old friend – except that Christine and I had actually only met once before and never had actually run together!  It was really amazing how well it ended up working out!

We saw my mom around mile 1, made our way across the Key Bridge and into Georgetown and then headed out onto Rock Creek for a few miles of an out and back part of the course.  This part was pretty narrow and very congested so we weren’t quite able to keep up the pace we were hoping for, but I think it was around here that I began to think I wasn’t too concerned with my time goals, I was really enjoying just being a part of this incredible race.

We passed the Kennedy Center and eventually ended up running along the Potomac River, which if I remember correctly is where the incredible military tribute was.

There were signs with pictures, names and ages of those killed in action lining the way… 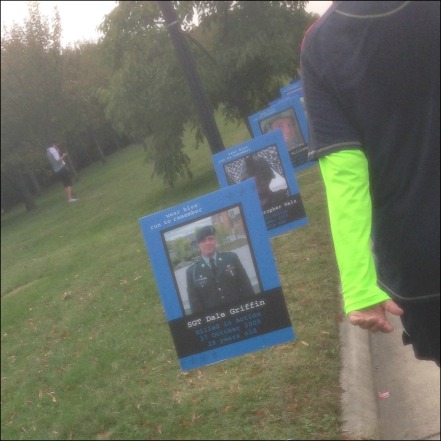 …and immediately following that there was a section lined with flags, each with someone’s name hanging off of it.

This part of the course was very quiet and reflective and again it made me think about how glad I was just to be a part of this event.  This race was about more than just running 26.2 miles.

We reached the halfway point of the run and Christine and I noted we were at 2 hours and 22 minutes.  I was still well on track to PR my previous full marathon time, but my ultimate goal of 4:30 seemed a bit out of reach at this point.

We passed my mom again around mile 16 and I gave her my arm sleeves and she gave me my favorite long run fuel – pretzels and orange juice!  (Actually that’s my favorite fuel on pretty much any given day.)

By miles 17 & 18 we were running along the National Mall and by the Capitol building.  Christine and I couldn’t stop saying to each other how amazing it was!

And honestly, I couldn’t believe how amazing I felt!

We “Beat the Bridge” at Mile 20 and I was feeling strong and was actually starting to pick up speed.  I turned around to Christine and she waved me on and yelled for me to keep going, I gave her the universal sign for “I’ll call you later” and off I went!  (I’m so happy we stayed together through 20 miles, it was so great to have company! And in hindsight I should have maybe warned Christine I have a tendency to pick up speed as the race goes on!)

I was on my own and I decided to give it all I had for that last 10k.

Once I was over the bridge the course weaved through the streets of Crystal City and headed towards the Pentagon for the last few miles, but not before the famous Marine Corps Marathon Munchkin Stop!

Yes, they serve munchkins at Mile 24 and it was one of my race goals to eat (and keep down!) a mile 24 munchkin!

For the last 2 miles we were back on the highway before taking a quick left turn and coming face to face with THE HILL.

I had heard such legends about the Marine Corps Marathon final hill to the finish, that in my head I think I had made it out to be Mount Everest.

I put my head down and charged up the hill.  Looking down at my watch I realized the seconds were ticking towards 4:35 – a time I’d be more than happy with – so I looked up to see how far I actually was from the finish line and I was startled that it was literally about 100 feet from me!

I charged towards it and knew that while I didn’t make my 4:30 time goal, taking into consideration the crowded course and the many (many!) hills, I was more than happy finishing around 4:35.  Seconds later (before I even got my medal!), my phone buzzed with my text alert – Finish Time 4:35:00 on the dot!  (Which is a 9 minute negative split for anyone doing the math from my time at the half!)

I got my medal, took a photo up by the Marine Corps Memorial….

…and went to collect some water and a jacket to keep warm and I literally bumped into Christine who finished just minutes behind me!

Overall, I really can’t say enough about this race.

The weather was perfect, the course was beautiful (and hilly!), I had great company, and the support from the Marines was amazing.  I wish I could count the number of Marines I high-fived during the race, or the hands I shook going through the finish line area.

While I always do my best to thank the volunteers at any race, these thank you’s were different.

The atmosphere on this course was different.  Yes, these men and women were taking their time to support us through 26.2 miles, but with every “Thank You” myself and the other 30,000+ people out on the course said that day, we weren’t just thanking them for the water, or the Gatorade or the munchkin.  We were thanking them for their service to our country, and that made this whole race experience not only different, but incredibly powerful.