So if you’ve been seeing my Weekly Training Recaps you may notice that well…there’s not all that much to recap!

Since we’ve moved I’ve sort of been struggling to get anything other than a few runs a week in (and this week I only ran twice!), not to mention I haven’t been to yoga once since we moved!

This little bit of back deck “pajama yoga” with Madison is the best I’ve done recently! 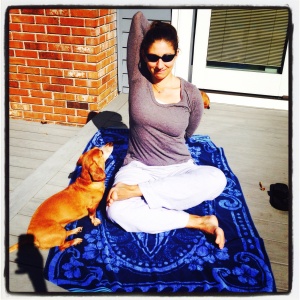 I’m not sure if it’s adjusting to being back at a full time job (for any new readers, I had been going back to school before), my longer commute, or the fact that Jason is home a lot more now so I’m sort of getting sucked into wanting to be at home with him rather than wanting to go to yoga.

As far as running goes I typically run three times a week, so since I’ve been on the Cape it’s Tuesday nights at run club, a long run on the weekends and it’s that one other run during the week that I’ve been struggling with!  I know I should get up early and go before work on Thursday’s, but I just need to motivate myself to get my butt out of bed!  (Any early Thursday morning runners who would like to volunteer to call/ text/ bug me to GET UP AND RUN let me know!)

Running in the morning before work isn’t new to me, I always ran before work when I worked in NYC and was training for my first marathon, it’s really just a matter of making it a habit again!

Yoga is another story.

I really do want to get to yoga, but unfortunately the limited class schedules offered at the studios near me on the Cape make it a little difficult to get there!  I have yet to find a studio that offers an early morning class I could go to before work (the studio I went to in NY had a 6am class), and the options for after work are very limited.  Weekends have been busy so far, so I haven’t been able to make it to a class on the weekend, but hopefully things will slow down in a few weeks and I’ll be able to go.

In the meantime, with just under a month to go until the New York City marathon I’m really going to make it a point to get in 3-4 runs a week and try to practice some yoga on my own at home if I can’t make it to a class – not to mention I really need to up my foam rolling game!

Have you ever moved/ changed jobs & had trouble adjusting your workouts?

Any tips for adjusting to a new schedule or getting up early??