Day 3 and another 3am wake up call.

Honestly by this time when my alarm went off I was about ready to throw it across the room.  I’m not a morning person to begin with (not that this was morning so much as middle of the night…), and it certainly didn’t help that I wasn’t particularly thrilled with the course crowding and lack of characters during the first two legs of the Dopey Challenge.

But, up I got!  Today was half marathon day!

I met my running crew at the start area and we began the LONG trek to the corrals (if you’ve never done the half or full at WDW Marathon Weekend it’s about a 20 minute walk to the corrals!). 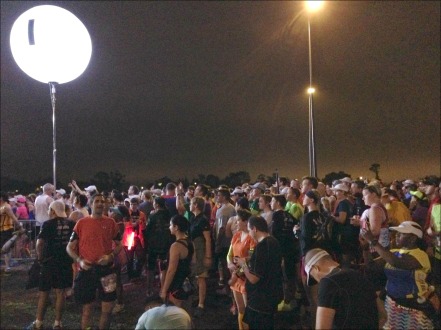 …we finally did make our way in (after basically being attacked by the corral bib checkers – man were they aggressive!) and took our usual pre-race corral selfie! 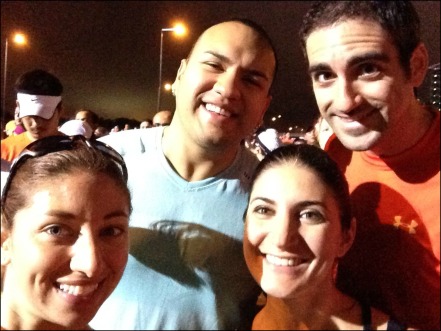 Me, Roy, Jenn and Daniel 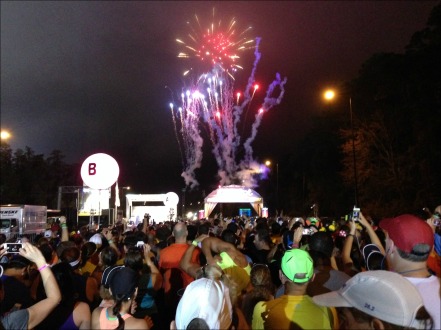 The only way to describe the beginning of this race is SLOW and CROWDED.  And if I wasn’t already upset about the corral placement for the Dopey Challengers (see my Angry Corral Rant HERE) let me tell you I just about lost it when around mile 2 I realized the 2:45 pace group was in our corral!!

Now please understand that I have absolutely no problem whatsoever with anyone who runs a 2:45 half marathon.  If you’re off the couch and doing something (anything!) I’m happy/ proud/ excited for you!  But, having submitted a 1:59 half proof of time, I don’t exactly agree with my placement in the same corral as the 2:45 pace group.

That is all I’m going to say about that (for this post at least).

My anger subsided when we got to the Transportation and Ticket Center and Jenn‘s dad, for the 2nd year in a row, handed us THE WORLD’S BEST RACE SNACK – A DOLE WHIP!

And then, we proceeded to take THE WORLD’S BEST RACE PHOTO! 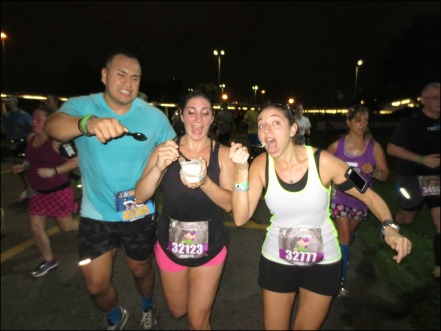 Roy, Jenn and I running and eating our mid-race Dole Whip!
Photo by Daniel Wanderman

Roy clearly has yet to learn that you don’t come between Jenn and I and a Dole Whip!

(**RACE TIP: These mid-race Dole Whips come from the Polynesian, find yourself a loyal race spectator and have them bring you one!) 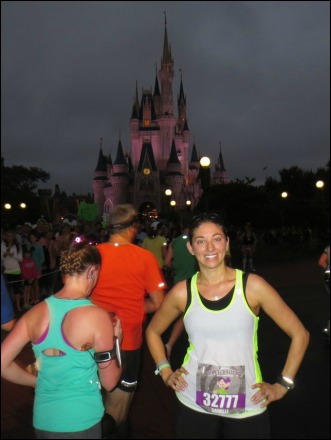 …through Tomorrowland and the castle and made a quick stop for a picture with Woody before we headed out of the park.

(**This would pretty much be our only character stop since all the lines were so long!) 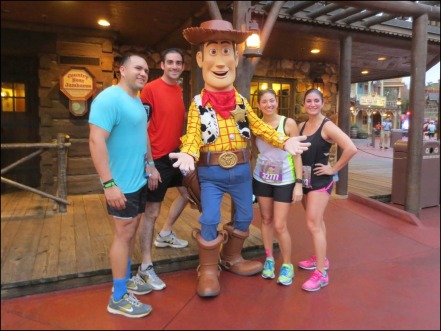 Coming out of the Magic Kingdom we ran by the Grand Floridian and the Polynesian where Jenn’s dad met us with…ANOTHER DOLE WHIP!

After a second round of Dole Whip there was just a few miles of highway between us and the finish line!

Well, a few miles and a few pushups of course! 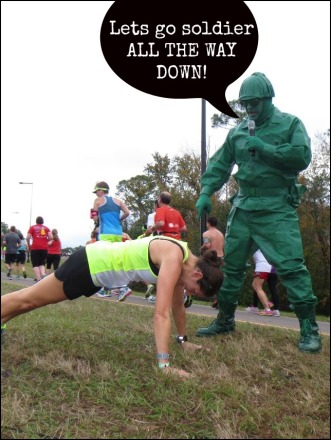 I continued the mid-race pushup tradition by dropping and giving the green army man 5! (I stopped at 5 so I didn’t hold up the photo line.  Ha!  Who am I kidding, 5 pushups is totally all I can do!)

The green army man was pretty psyched about it, gave me a big high five and sent me on my way! 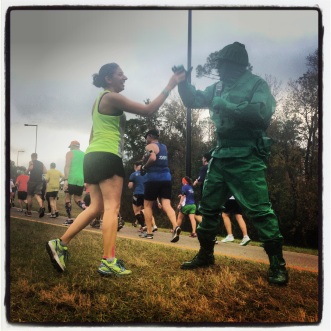 So, I’m not sure why, but for some reason Dan and I kept thinking that the half marathon went through Hollywood Studios…clearly not because we got to mile 12 and realized we were heading in to Epcot and were just about to the finish!  (Too many races to keep straight!) 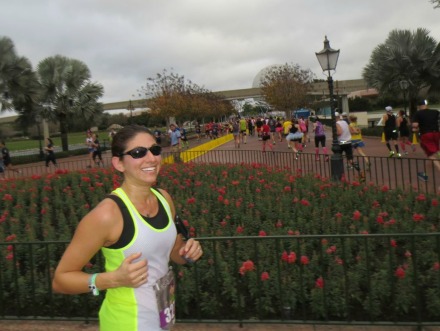 We headed under Spaceship Earth and out towards the finish line in the Epcot parking lot! 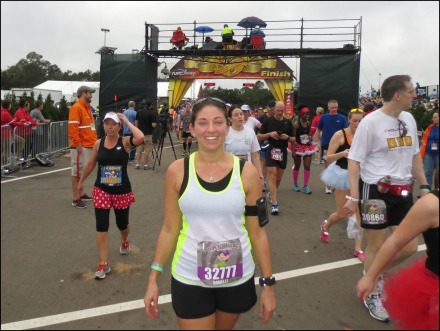 My overall thoughts on this race?  It was crowded basically from start to finish for me and I definitely think there were less characters than last year.  I heard from others in corrals ahead of me that they didn’t find the course crowded at all so I’m chalking it up to being in a corral of runners running at a slower pace than I was trying to run at – definitely made for a lot bobbing and weaving! 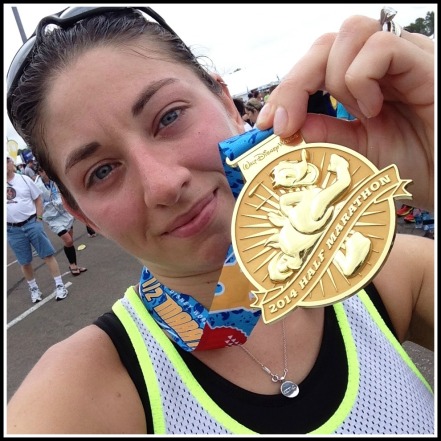 If you missed my recaps of the 5k and 10k be sure to check them out!

**Special thanks to Daniel Wanderman for all the awesome race photos!**

28 thoughts on “Dopey Challenge: The Half Marathon”