I can’t believe Dopey weekend has come and gone!  There is just so much to recap, so I’m planning on breaking it down race by race and then I’ll write a separate post with some pros and cons of the weekend and my overall feelings on if I would do the Dopey Challenge again.

So, as any race weekend does, it all began with the expo!

All Dopey Challenge participants had to visit the expo on Wednesday since the first of the four races, the 5k, was on Thursday morning.  I landed in Orlando Wednesday afternoon dropped my stuff off at my “home” for the weekend (Saratoga Springs) and met a few friends at the Magic Kingdom – we had decided we were going to go with our same Wine & Dine expo strategy of arriving about an hour before it closed to avoid the crowds.

On the bright side I wasn’t too disappointed about not buying a shirt, because for once the included race shirts weren’t horrendous!  Dopey Challenge runners got 6 shirts (1 for each race, plus a Goofy shirt and a Dopey shirt) and runDisney FINALLY not only offered women’s cut shirts, but the tech material was good/ real tech material, not the brillo pad/ cardboard the shirts have been made of in the past!

This is the first time I’ll actually get some use out of my runDisney race shirts!

The morning of the 5k I got on one of the event transportation busses around 4am to meet Daniel and Patrick at the starting area outside of Epcot for the 6:15am start.

We had decided that we were going to run together and stay at an easy pace to conserve our legs for the rest of the races we had coming up over the weekend.  We loaded into our corral (B), and at 6:15am we were off for the first leg of our Dopey Challenge!

I have to admit I was not particularly thrilled with the 5k.  It was incredibly crowded from start to finish and over the entire 3.1 miles we only saw 4 characters!

One of the characters that was out in Epcot’s World Showcase in front of Germany was Dopey.  Now I’m not sure who at runDisney thought that this was a good idea with there being 7,000 people running the inaugural Dopey Challenge, but the line for Dopey was unbelievable!  We ran right by and finally stopped for this quick picture with Remy  and Emile in France. 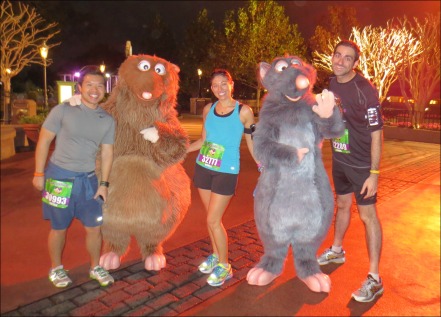 A quick Spaceship Earth photo on the way out of Epcot….

…and we were quickly at the finish line! 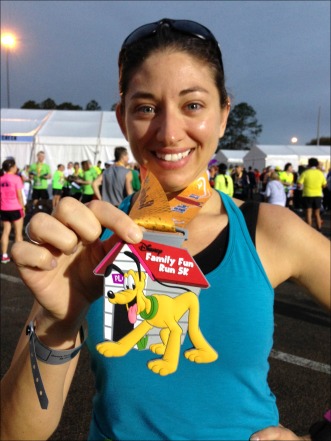 I have to say I was disappointed with the lack of characters and entertainment during the 5k, but since it was starting to drizzle out I left giving them the benefit of the doubt that maybe the rain was the reason there weren’t many characters out.

We grabbed our post-race snacks and made sure to hydrate and re-fuel to be ready for the 10k the next day!