If you’re a runner there’s a good chance about a year ago you were glued to a TV or computer screen watching this unforgettable moment. 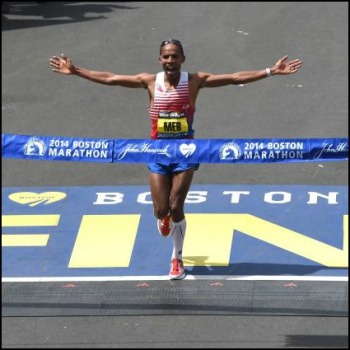 One year after an unthinkable attack on the race, 38 year old Meb Keflezighi (who was largely considered “to old” to win marathons any more) turned onto Boylston Street and with the names of the 4 victims written on his race bib, became the first American man to win the Boston Marathon in over 30 years.

In the eyes of many, Meb reclaimed the Boston Marathon.

Last year at the Falmouth Road Race expo I had the opportunity to hear Meb talk about his running career and his Boston Marathon victory.  Between his talk at the expo and his first book Run to Overcome, it was fascinating to learn about Meb’s background, his training and his sheer determination to win the Boston Marathon in 2014.

Meb’s training is unique in a lot of ways compared to many other elite runners.  At 39 he’s considered “older” in the sport and he’s adapted his training to fit what works best for his body.  For example, instead of running twice in one day as many professional marathoners do, he now opts to use his ElliptiGO to get in the extra milage.

I could have listened to Meb talk all day, so I was excited when I heard he was coming out with a new book that went into his approach to training in detail – and even more excited when I was asked by Runner’s World magazine if I’d be interested in reviewing the book!

If you get Runner’s World, you may have recently seen a bit of a preview of what to expect in the book… 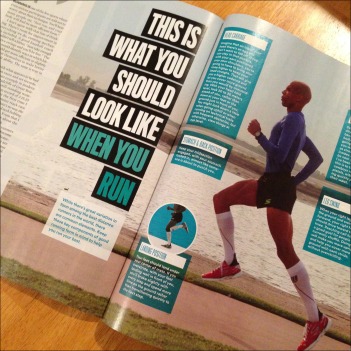 …but Meb for Mortals really dives into Meb’s personal training and how you can apply it to your own training and running goals – even if your only real goal is to stay healthy and running injury free!

As you can see from the table of contents, the book covers everything from thinking to training to eating like Meb and MUCH more!

Page Screenshot from Meb for Mortals

I personally appreciated that he even addressed “yoga and running” in the book!

Meb shares his favorite drills and stretches and there are plenty of pictures (of him!) demonstrating exactly how to do them.

There are even pages that are right out of his training journal from when he was training for the Boston Marathon so you can see exactly what he was doing to prepare (and boy is being a professional marathoner a lot of work!).

While I haven’t had time to read the book cover to cover yet, I really do like all the information that Meb shares on his personal training and how you can apply it to your own running.  After a recent running and gait analysis I know I for one really need to start doing some strength training exercises!

run the Boston Marathon in a few days?!?

*Disclaimer – I was provided a complimentary electronic copy of Meb for Mortals by Runner’s World for review purposes.  I was not compensated for this review in any other way and all thoughts and opinions are my own.