Apologies for the delay on my Disneyland Half Marathon Weekend race recaps, but between being out in California and then getting home and having only 2 days to pack to move, stuff has been a bit hectic around here, so bear with me!

Jason and I arrived in California on Thursday morning and immediately hit up the parks!  The race expo was opening at noon, but we decided instead of battling the crowds at open we’d wait and stop in towards the end of the day.  We were staying right at the Disneyland Hotel where the expo was being held, so when we got a text alert later in the afternoon that our room was ready we figured it was the perfect time to go back, take a quick shower and pop into the expo.

I honestly think we were in and out of the expo in under 15 minutes!  Being that we’re in the middle of moving and I’ve been overwhelmed with the amount of “stuff” we have I really wasn’t interested in shopping and bringing anything else home to move!

Saturday morning Jason and I got up, had a coffee, got on our uniforms and these Ducks were ready to fly!

One of the reasons I LOVE the Disneyland races (and Disneyland in general!) is how close everything is! We literally left our room at 4:45am for a 5:30am race start!

We had some time to stretch and hangout in the corral and I even ran into Carlee from Be the Change who I’ve been looking forward to meeting for awhile – I literally turned around and she was right there!

Since Jason and I were in corral A we were off and running pretty quickly!

Unfortunately Jason’s knee had been bothering him for a few weeks leading up to race weekend, so we decided we’d take it easy, stop for pictures, take walk breaks if he needed and use the 10k to asses how his knee was and if he’d be able to do the half marathon the next day.

We started off at a comfortable pace and quickly came upon our friends Daniel and Tana who not only got up at 5am to cheer us (and all the other runners!) on, but made this awesome “Ducks Fly Together” sign!

After about a mile through the streets around the parks, we entered California Adventure through the back and were right in Cars Land!

Unfortunately most of my pictures didn’t come out great (Marathonfoto may actually be getting some of my money for this race if they got some good ones!), but we stopped for pictures with some of our favorites (who we actually dressed up as for the 10k last year!), Mater… 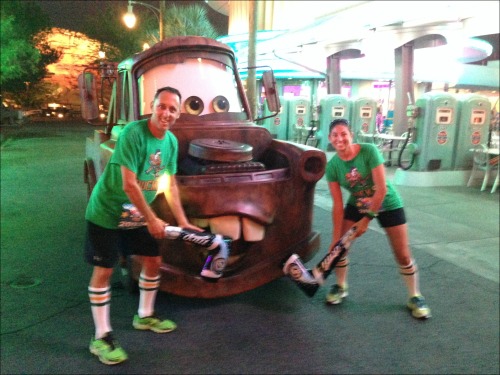 Then we ran around Paradise Pier where the World of Color fountains and lights were on (always a Disneyland race favorite for me!).

By this point unfortunately Jason’s knee was already starting to bother him, so we started adding in some walk breaks so he wouldn’t over do it.

We exited California Adventure and entered Disneyland, ran down Main Street and stopped for a quick face-off in front of Sleeping Beauty Castle!

And then back in Fantasyland we ran into Elvis and Chip & Dale doing the Jailhouse Rock!

**The Disneyland 5k & 10k were Lilo & Stitch themed so there was a lot of Elvis music and sightings during the races since Stitch was a big Elvis fan!**

In Frontierland we ran past what looked like a character stop, but there was no one there…I later saw from other people’s pictures that it was Stitch, but he was apparently taking a break (or snuck off to cause some trouble!) when we ran by.

We exited Disneyland and ran through Downtown Disney towards the finish!  Downtown Disney probably had the most spectators of anywhere during the race and we certainly got a lot of “QUACKS!” and “Go Ducks!” as we ran by! 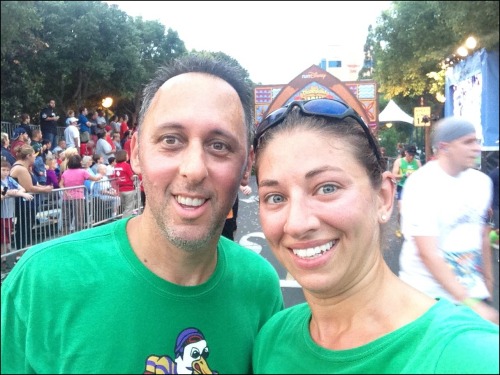 We crossed the finish line, got our medals and Jason headed right over to the medical tent area to get some ice for his knee since by this point it was hurting him pretty badly. 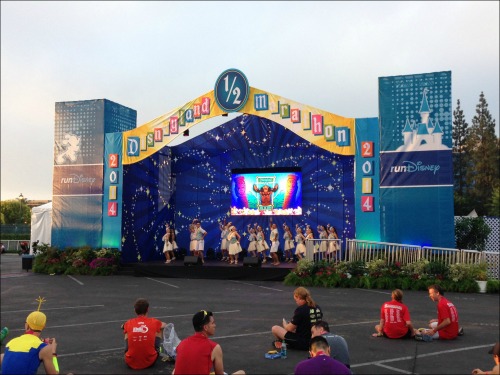 …but we got our water, snacks and some ice for Jason and headed right back to our hotel (about a 2 minute walk!), so he could sit and ice his knee in hopes of being able to run the next day.

Despite being a little disappointed at the lack of characters along the course (4 characters total for a 10k?!?), I had such a great time running this race with Jason!

I have to admit I’m still a little surprised he not only agreed to dress up as the Mighty Ducks, but carried an inflatable hockey stick and took pictures pretending to face-off with me!