This past weekend a few friends and I headed down to Washington DC for the Cherry Blossom 10 Mile Run.  We honestly had such a great time and did SO much, so I’ll be writing a separate post on the rest of our DC adventures, for now this is just a recap of the actual race!

Friday night after we arrived in DC, Dan and I headed over to the expo to pick up our bibs (Pat was flying in later that night).  In keeping with our usual expo plan we popped in about 5 minutes before they closed and were in and out of there in under 10 minutes!

We then spent the rest of the night Friday and all day Saturday diligently focusing on our race prep.  We went to museums and took multiple walking tours of DC.  We ate at amazing restaurants and were sure to completely stuff ourselves (and then have dessert).  And we went to bed entirely too late.

Yup, come Sunday morning there was nothing we wanted to do more than get up at 5am and run 10 miles!

So, up we got and off we went!  We walked the mile from our hotel to the starting area at The Mall, which would have been a nice warm up walk, except it was anything but warm.  The cold definitely caught us a little off guard, but thanks to our throw away clothes and some spare trash bags we managed to keep warm (enough) until the start. 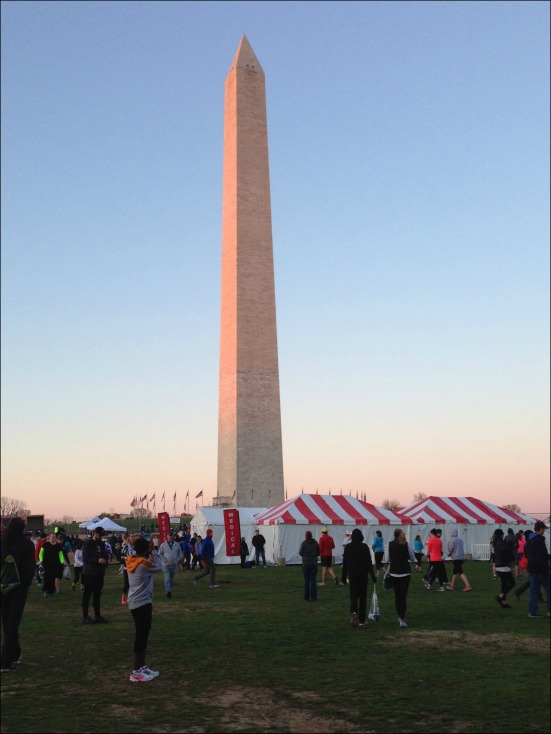 After a quick porta-potty stop (thumbs up to Cherry Blossom for having plenty of porta-potties!) we wandered over to the stage area to find Christine who was volunteering for the morning!

When Christine and I were done reminiscing about the Marine Corps Marathon we ran together in DC last fall the boys and I headed to the corrals, where Dan, Pat, Jenn and I took our traditional pre-race corral selfie!

Ok, so Jenn wasn’t really there, but she was supposed to be there with us until she realized she had a wedding that weekend, so we decided to have some fun and take “flat Jenn” with us on the trip!  (This was the race version, we actually had a better cutout version that we took pictures with all over DC!  Honestly, I had way too much fun with this whole thing!)

We crossed the starting line and I can honestly say I immediately felt the effects of all my well planned and executed race prep. 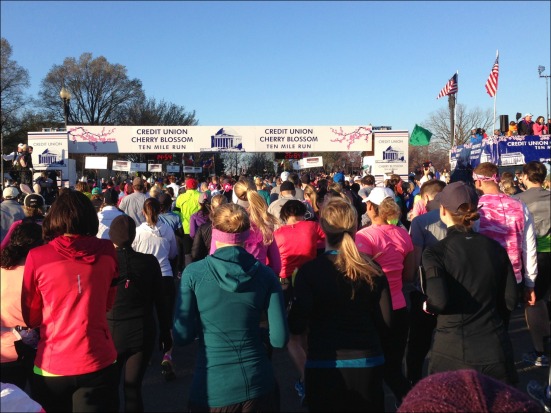 I was tired. My legs hurt and certainly did not feel like moving at all, much less at a decent pace and I could totally tell I was dehydrated.

The course itself had a lot of short out and backs and loops and was fairly crowded from start to finish. 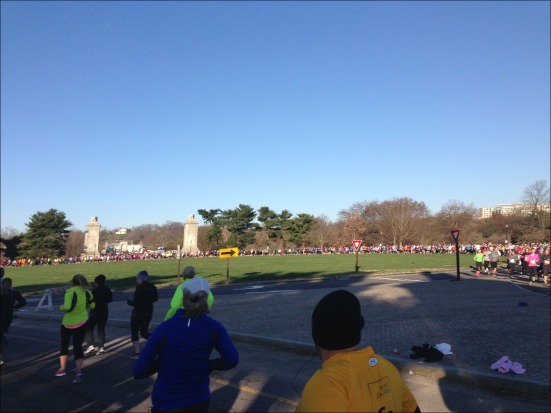 And while the run was still gorgeous, the cherry blossoms weren’t as cooperative as we would have liked them to be. 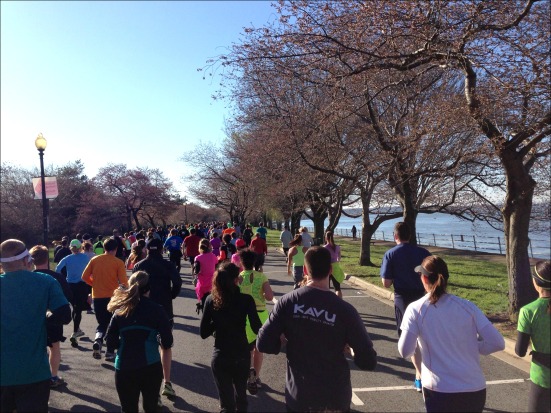 Other than the crowding for most of the race, my only other small complaint is the water stops.  There were plenty of them and they were well manned, but they were only on one side of the road, so every time we’d go through a water stop the crowd would crowd even more over to that side of the road trying to get water and it was just a congested mess!  I honestly probably ran into/ tripped over/ spilled water or Gatorade on someone going through every water stop because it was just so hectic!

Luckily the boys found this makeshift beer and oreo stop along the way and were able to hydrate & fuel up there! 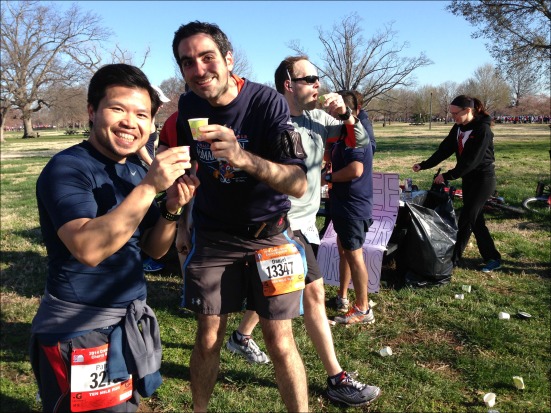 I couldn’t be happier to finally see the finish line!  And in the end my overall pace wasn’t as bad as it felt (it felt like I was slogging my way through quicksand for 10 miles), so considering my stellar race prep I was more than happy with my run.  (But still very glad it was over.)

We wandered around the finish area on The Mall for a bit, grabbed some snacks and water and found Christine to say goodbye before we headed back to our hotel for a quick shower and brunch before our bike tour of DC!  (We billed the day as a mini-duathlon.) 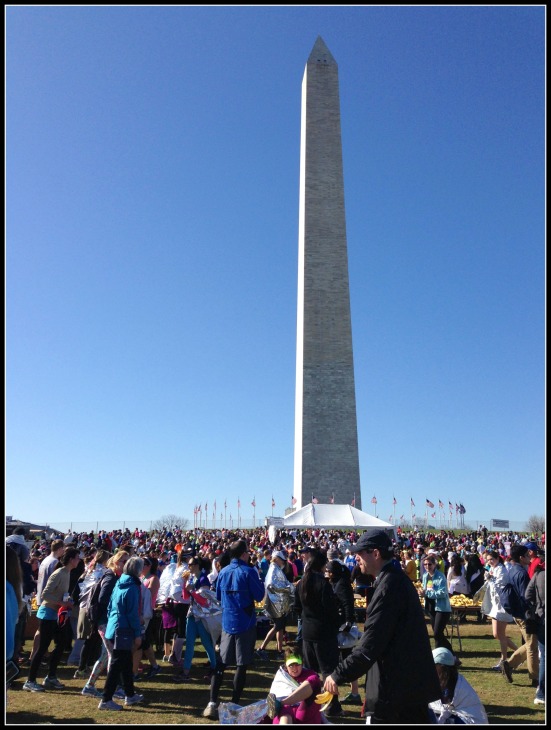 One of the things I liked about this race was that basically to keep the cost of the registration down you got a cotton t-shirt, but could pay extra in advance to upgrade to a tech shirt and when you registered you had the option of no medal, or getting a medal for an additional fee.

I didn’t opt to get a medal, but Dan did, so if you’re interested, here’s what they look like!

And with that, we were off to continue our commando touring of Washington DC!

What do you think about medals being an add-on option??