So yesterday I kicked off my fundraising to celebrate National Adopt a Shelter Pet Day, tomorrow I’ll announce a fun prize for one of my donors in honor of it being 6 months until marathon day and today I’ll share some of what I learned when I toured the North Shore Animal League facility yesterday – and get this, today just happens to be their 70th anniversary!

I got to tour the actual adoption center and see all dogs and cats waiting for their forever families to come and get them – they were all so cute!

**SPOILER ALERT: as tempted as I was, I DID NOT come home with another dog!**

The facility was clean and bustling with staff, volunteers and potential adopters.  (I apologize for the lack of pictures, but they prefer no cameras in the adoption centers.)

They also have a full “campus” of other buildings, including a full on-site veterinarians office, a pet shop for new pet parents to pick up some supplies, a building called “the arc” where all new rescues go upon arrival for their check up and grooming, a nursery for all the newest little puppies and kittens and even an outdoor dog park to make sure the dogs are getting plenty of exercise!  (I would have taken more out door photos, but it was down pouring the entire time I was there!)

North Shore Animal League also has several large mobile units that they use to be able to go around the country for rescues and adoption events – right now they are in the middle of their Tour for Life which will travel to 26 states!

North Shore Animal League was also behind the “Cat Cafe” that happened in NYC last weekend – a pop up cafe was set up and offered free coffee and and allowed visitors to interact with cats roaming around the cafe…and if you fell in love with one of the cats, good news – they were all up for adoption! 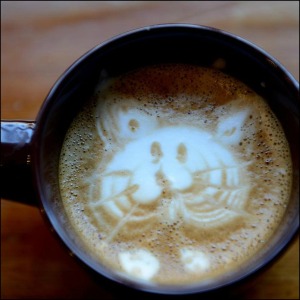 “CAT”-accino’s were the specialty drink!

It was great to be able to see first hand where all the money I’d be raising was going and I’m hoping to attend some of their other upcoming events and go back for a Team Animal League meeting where I’ll get to meet some of the other runners participating in the NYC marathon this year!

or to support my fundraising efforts please visit:

13 thoughts on “A Visit to North Shore Animal League”