The second morning of our cruise we woke up just in time to watch the ship pulling into Castaway Cay, Disney’s private island, from our stateroom…

…I grabbed a quick bite to eat and headed down to the meeting area for the Castaway Cay 5k.  Once all the registered runners had arrived (you can register at Guest Services anytime after you board the ship) the cruise staff took time to explain the plan for the morning and to go over the course (twice, so no one got lost!). 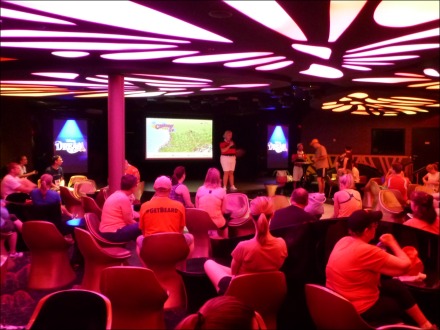 Around 8:30am the ship was cleared for us to get off.  We debarked together (I think there were around 100 of us that day) and walked about 7 minutes to the starting line.

After one more quick overview of the course we were off!

The course quickly brought us out to a long airstrip without much relief from the sun – it got hot and humid very quickly!  (If I remember correctly it was about 75 degrees that morning.)

…there was a little bit of shade in the bike loop, but coming from freezing temperatures in the northeast the humidity was a bit rough – luckily there were plenty of self-serve water stops along the way!

Coming out of the bike path we continued out to the end of the airstrip towards Serenity Bay (the adult only beach), made a u-turn and then went back into the bike path for a second loop.

When it comes down to it the loop was the same distance no matter which direction you ran it in, so whatever!

We exited the bike path and headed towards the finish back where we started. 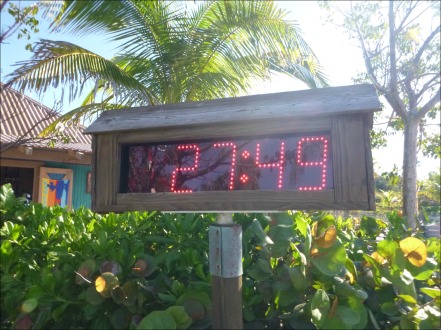 I wasn’t wearing a GPS watch and the course didn’t have any mile markers, so I can’t say if it was an accurate 3.1 miles…that being said, I’d be pretty surprised if I was actually running an 8:58 pace as indicated by the time above since I haven’t been running very much and the humidity was pretty bad.

After crossing the finish line, I got my “medal” and pretty much ran right into Jason who had apparently timed his departure from the ship perfectly to meet me at the end of the run!

I made a quick stop at the merchandise shop near the start/finish area to buy a Castaway Cay 5k shirt & pin (because really, how often do you run a 5k in the Bahamas?)…

…and then grabbed my bag that I had brought with my bathing suit (they have a bin you can store bags in while you run) and headed straight to the beach!

Finish line to toes in the water in under 5 minutes?!  Can’t beat that! 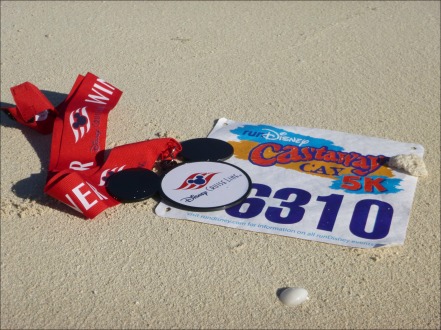 Would you run a 5k while on a cruise?