Honestly, what a great day!

We literally could not have asked for better weather (clear skies and mid 50’s!), the entire event was well organized and best of all, I got to run my husband’s first marathon with him in his hometown – overall I’d say the race was a huge success!

Race start was at 8am, so Jason, Pat and I left my mom’s house around 6:15am, got to Hartford around 6:45am and had plenty of time to park, check our bags and make a last porta-potty stop before it was go time! 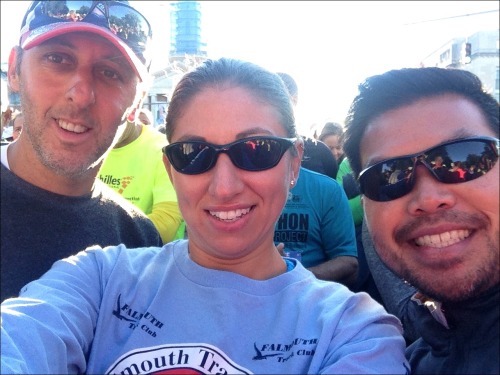 I didn’t have a specific time goal in mind, but a 10 min/mile pace sounded good, so we jumped behind the 4:20 pace group and figured we’d see how it went.

Miles 1-6 were in Hartford and weaved around the city, through some beautiful parks…

…and along the river.

Right before mile 6 we saw my mom and brother!  My brother, sister and her fiancé made Jason a sign that was PERFECT for him!  (If you know Jason, you know he LOVES his ice cream!)

**NOTE:  Yes, I actually DO have a brother!  This may be the first time he’s made an appearance on the blog.  He lived overseas for awhile, but he’s back and I loved that he came down to support Jason & I for this race!**

Our half marathon split had us at a 9:56 pace, right around where we wanted to be.

At miles 14 on the “out” and 20 on the “back” we saw my mom and brother again, this time with Jason’s parents – it was definitely fun to have some spectators to look forward to!

One of the things I really liked about this race was the on course support on bikes – there were actually volunteers biking up and down the course not just as course monitors, but they had gels, medical supplies and water readily available if you needed it!  At around mile 20 I asked one if he had vaseline or glide since I was chafing a bit and he said he didn’t but he’d go get some and come back – he biked away and 2 minutes later he showed back up and handed me a little packet, it was awesome!

By mile 22 I started to lose steam and have some MAJOR (and totally new) knee pain, so I threw in a short walk break at each mile marker in hopes of keeping up my energy and alleviating the pain.

Jason by the way was doing GREAT!  He was knocking down those miles, chatting away and encouraging me when I was getting tired and hurting – you would have never guessed it was his first marathon!

Right after mile 25 we crossed the bridge back into downtown Hartford and knowing how close we were to 4:20 I tried to pick up the pace a little…

…unfortunately going over the bridge though I started to breathe pretty heavy and ever since I pretty much had a panic attack at track club over the summer when I pushed myself a little too much I get nervous when my breathing gets too hard, so I backed off a little and walked for a minute.

Once we were in the city with less than half a mile to go Jason encouraged me to keep going, we wouldn’t be under 4:20, but we still had a chance of being right at 4:20…

I was in a decent amount of pain in the picture above (damn knee!), but I have the hugest smile on my face, I was SO proud of Jason!

He ran an amazing race.  He ran strong, stayed positive and even managed to encourage me when I was struggling.

The finish area of the race was amazingly well organized.  As soon as we crossed the finish line we were wrapped up in heat sheets by volunteers and not 10 feet later there was “the bubbler”, which is basically a long contraption with about 20 water fountain spouts on it so you could immediately get a drink.

After a quick drink we walked around the corner and were given our medals, a reusable water bottle (already filled with water!) and a reusable bag filled with snacks.

I LOVE that they give out reusable “Finisher” water bottles instead of one time bottles, it saves SO much plastic and it’s a great piece of race swag!

Gear check was up a hill towards where the starting line was and I was not particularly looking forward to that walk – not that it was long, it was just up a hill.

Well, that Hartford Marathon had thought of that too!  Right at the bottom of the hill there was a line of golf carts giving rides up the hill to bag check – seriously one of the best race day runner services I’ve ever seen!

After grabbing our bags we hit up the athletes food tent which had a pretty good spread of stuff (in addition to the stuff we already got in our bag!) – bagels, bananas, corn bread, pumpkin bread and vegetarian chili!

We spread out our heat sheets on the grass and had ourselves a little picnic before stopping at “Mile 27”, aka the beer garden!

I really can’t say enough good things about this race.  The Hartford Marathon Foundation puts on a great event and offers some unique runners services like the “on-demand” course support and the rides up the hill to back check – they definitely plan with the runners in mind!

This was a perfect race for Jason’s first marathon and it being his hometown made it even more special! 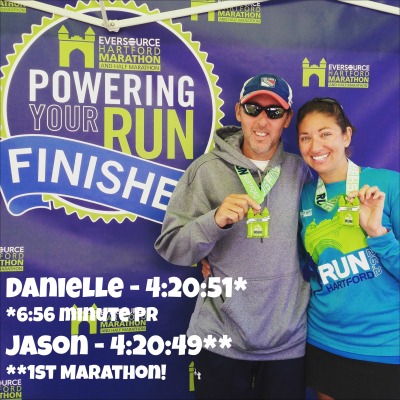 Now it’s time to focus on recovery since I get to do this all over again in 2 weeks at the Marine Corps Marathon!

Oh, and in case you were wondering…