It’s been awhile since I’ve written a race recap – this is only my 3rd race of 2015 and the other two were back in January (Goofy Challenge!).

Jason and I have been on the lookout for a local half marathon to run since he ran his first in January at Walt Disney World Marathon weekend.  Unfortunately during his first half marathon Jason had some knee pain pop up that forced us to take walk breaks and slow our pace and he’s been itching for a re-match against the 13.1 ever since!

We chose the Johnny Kelley Half Marathon after talking to some friends in our run club who have done it in the past and said it was pretty flat and had some great views along the coast.

So, I had secured our super speedy friend Dave to pace us that way even if I couldn’t run under 2 hours I’d be sure Jason would have someone to run with!

And then Dave went and hurt his foot running a marathon so yeah…that didn’t work out.

I knew how badly Jason wanted to run under 2 hours, and he doesn’t like running alone, so the day before the race I told him I’d keep him on pace for under 2 hours for as long as I could (which I was pretty sure wasn’t going to be 13.1 miles) as long as he PROMISED me that when I said so he had to leave me and go on his own.  He promised and we had ourselves a game plan.

The race offered bib pick up at our local Marathon Sports which is right in our town so Jason just popped in on Friday afternoon, grabbed our stuff and we were good to go!

The morning of the race we drove the half hour to the start and arrived just as the 5k was starting – we even snagged a parking spot about 100 feet from the start/ finish area, it was great!

We hit up the bathrooms (real bathrooms!), met up with some friends and then threw our sweatshirts in the car and casually strolled over to the start about 5 minutes before the anthem – gotta love a nice small local race! 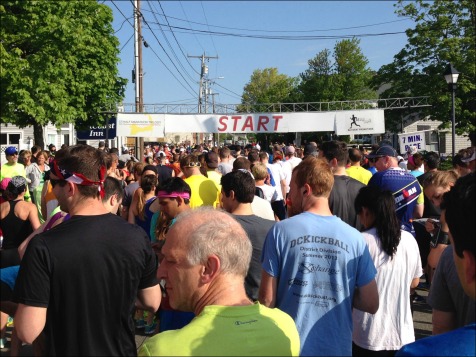 At the start we found our friend Chris from our run club!

I didn’t take any pictures during the race, so I’ll try not to bore you with too many details, just the highlights!

My goal was to keep us under 9 minute miles and we were on pace right from the start finishing the first mile in 8:53 and the second in 8:38.  I knew it was a little fast, but I also knew Jason could handle it and I figured we’d soon see how long I could handle it for.

We kept ticking away miles keeping them under 9 minutes with the occasional mile hovering right around 9 as we ran into some pretty strong headwinds along the water – the views were gorgeous by the way!

Between miles 8-10 I started to fall behind Jason just a little and finally at the mile 10 water stop he turned around and looked at me and I just waved him on.  I was done and definitely needed a quick walk break to recharge, but he felt good and was easily on his way to an under 2 hours finish!

I spent the next 3 miles walking through water stops and taking the occasional break to bend my knees or stretch my calves.  I was vaguely aware of the time and knew as long as I didn’t just flat out walk the last mile I could still come in under 2 hours as well.

My mom and our friend Allison (along with her 2 week old baby!) were spectating right before the finish line and I think they were surprised to see Jason come flying by on his own – actually at first they thought he was behind me and they had missed me!

Jason not only met his under 2 hour goal, he totally smashed it crossing he finish line of his second half marathon in 1:54:56!

1:56:40 for me, my 3rd fastest half and a time I am more than happy with considering my lack of real training!  And considering my only real goal was to make sure Jason finished in under 2 hours I consider the day a huge success! 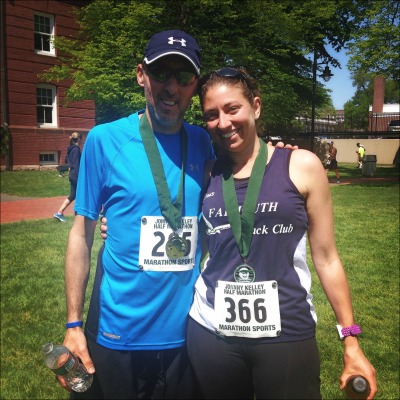 The Johnny Kelley Half marathon was a great local race, it was centered around the Hyannis Village Green with the start on one side of the green, the finish on the other and a stage and post race snacks right on the green.

After the race we met up with my mom, Allison, her parents, baby Catherine and a few of our other friends who had run and just hung out on the green for awhile since it was such a gorgeous day!  Then we hopped in our car (which was about 50 feet away) and were  home in half an hour!

I am SO proud of Jason, he worked really hard the past few months to be ready for this race.  He had a goal, he ran hard and he finished the race strong.  We’re already looking forward to training for our next half together and eyeing some new goals!

Do you prefer local or destination races?

Have you ever paced a friend/ family member to a goal?