For the past few days I’ve been reflecting on my Marine Corps Marathon experience.

For a race that I went into not feeling as well prepared as I would have liked it ended up being the perfect day!  I decided to think about what really worked for me during this run and came up with a few race day takeaways.  I’m sure these will be helpful for me to look back on as I’m training for future races and I hope you’ll find something useful in them as well!

On Trying Something New On Race Day

I have a confession, I broke the cardinal rule of marathon running – NEVER TRY ANYTHING NEW ON RACE DAY.

In fact, I may have broken it a few times…

1.  I wore new pants.  Well not totally new, I wore them on a run once.  A 3 mile run. The day before.  What can I say, I really liked them!  And, they had good pockets which was important because…

2.  I ran without my fuel belt.  I always like having water with me while I run, I use my hydration belt for anything over 5 miles and I’ve only ever run 1 race (a 7 mile race) without it.  Recently my belt has been making me CRAZY though so I made the (questionable) decision to leave it behind.

3.  I ran with my “short run” sneakers.  I have a pair of sneakers that I’ve never particularly loved, so I’ve only used them on runs up to 5 miles.  I wore them during the MCM bRUNch run the day before the race and for some reason something clicked and I was in love with them!  I made the (again questionable…) decision on race morning to wear them for 26.2 miles.

Fortunately this all worked out perfectly for me on race day and while I’m glad I went with my gut on these I still wouldn’t recommend trying anything new on a race day!

Takeaway – make an effort to test out all possible race day scenarios, outfits, etc. to avoid doing anything new or different on race day!

On Dressing for the Weather

For some reason I really struggled with figuring out appropriate attire for the race day forecast of around low of 37, high of 55  (maybe because it’s been so long since I’ve felt 37 degrees??).

The night before the race I read something that said most people have a tendency to overdress for a race.  It suggested getting dressed, looking in the mirror and then taking something off.

So glad I followed this rule!  I had been debating a long sleeve shirt, but ended up going with a tank and arm sleeves which I could easily shed and had a throwaway sweatshirt pre-race.  It was perfect because it certainly did warm up quickly!

I have to admit I’m not the best at fueling during a long run.  I take a sports drink with me and I’ll usually loop back to the house at the halfway point for some pretzels and orange juice.  It works fine for me and I make it through my run, but not with much energy to spare.

During this race I had a pack and a half of sports beans, a pack of Honey Stinger chews, 3 orange slices, pretzels and orange juice, lots of Gatorade and water and a munchkin (well the munchkin was more for fun than fuel!)…and let me tell you I felt GREAT right through the end of the race! 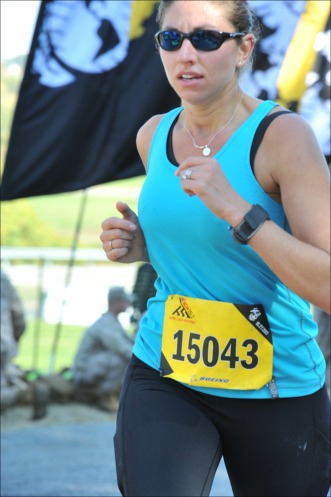 On Running a Negative Split

I’m just going to go ahead and pat myself on the back here for a second – I rock at negative splits.

I have negative split every race I’ve run (MCM was a 9 minute negative split!).  That being said, I have to admit it’s not something I do on purpose or something I actually try to do, it’s totally natural for me to slowly pick up the pace over the course of a run.  I think it just takes my body a little bit to wake up and come to terms with the fact that I’m going to keep running whether it likes it or not!

I do often feel at the beginning of a race that I’m going slower than I should be, but I’m starting to really embrace that and realize it’s a GOOD thing!  Especially in the marathon distance there is nothing worse you can do than go out to quickly – to run a negative split you need to have energy left in the tank for the second half of the race!

Takeaway – it’s OK to feel like you’re going too slow at the start of a race, it means you’ll have the energy you need later on!

What lessons have you taken away from races?

Do you struggle with any of my race day lessons above?