One week from today I’ll be leaving to go to Orlando for the Tower of Terror 10 Miler (a night time Villan themed race, how cool is that!  and yes, my 2nd runDisney event for the month of September!). 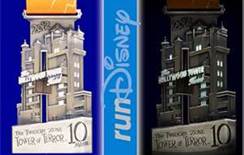 Awesome glow in the dark medal!

Months ago before I knew what my schedule would look like for the fall I registered for this race because I wasn’t sure that I’d be able to do the Wine & Dine Half Marathon in November and for some reason the Disneyland Half Marathon and Goofy in January just didn’t seem like enough! (As it turns out I am able to do W&D so I registered for that also – too many trips to Disney never hurt anyone!)

I’m excited for this trip not only for the race and a trip to Disney, but because it coincides with the start of a new chapter for me.  The day before I leave for Florida will be my last day at my current job, a job I have been at for 3 years in an industry I have worked in since I interned in college (10 years ago minus a 1 year hiatus).  While I’m excited about this change (and I do have a plan – but more on that later), it’s going to be hard to leave the people that I work with and an industry I’m so familiar with.  Working in professional sports isn’t just a job, it’s a lifestyle…and I’m in for a major lifestyle change. 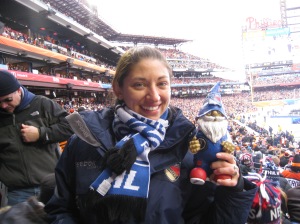 It’s an exciting time, but in the same breath it’s a lot to take in and I’m very nervous about moving on.  There is no place better than Walt Disney World to absorb all of this change, I think I’ll have time to think about everything, but I’ll be distracted enough that I won’t over think.  I’m only going to be in Orlando from Thursday-Sunday, but I’m really hoping to try to get in a run everyday (hopefully in different places around Walt Disney World!) and I may even do something I’ve never done at Disney…SIT AT THE POOL!

Much more to come on my plan for the future, but in the meantime I’m looking forward to my Tower of Terror 10 Miler trip as a good training run (that ends with a really cool medal!) and some time to transition into the next few months and years!